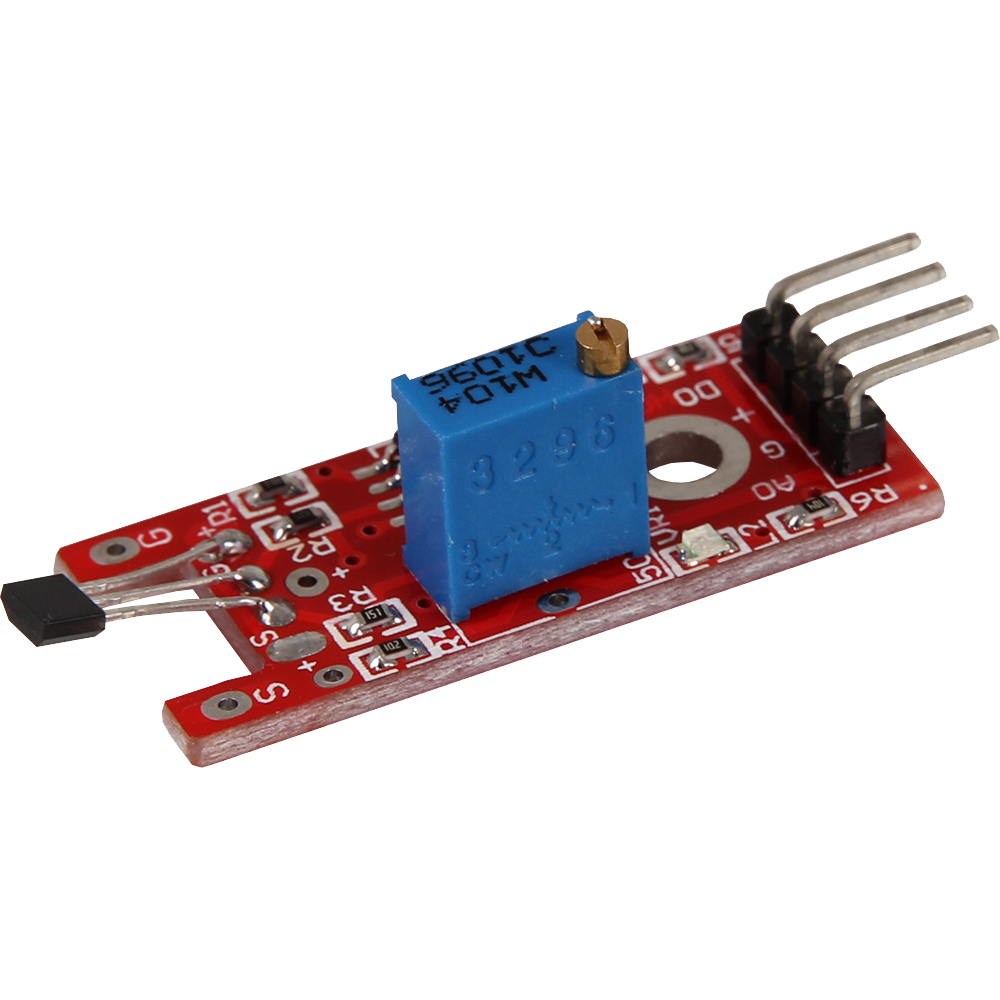 Hall-effect switches are integrated circuits with magnetic specifications. This means that all required components are already integrated in the sensor and it has an increased sensitivity with respect to magnetic fields. The sensor is suitable for continuous operation at temperatures up to +150 °C and is characterized by its stability to temperature and supply voltage changes. Each unit includes a voltage regulator for operation with supply voltages from 4.5 to 24 volts, a reverse polarity protection diode, a square Hall voltage generator, temperature compensation circuitry, small signal amplifier, Schmitt trigger, and an open collector output to sink up to 25 mA. The transistor switches through if the module is held in a magnetic field. This can then be read out at the signal output as an analog voltage value.

This sensor is ideally suited for threshold measurement. This means that the sensor emits a digital high signal as soon as a threshold value set by the user is exceeded. However, this also means that the analog measured values are not suitable for conversions, as the analog signal is also influenced by the rotary potentiometer.

Digital output: If a magnetic field is detected, a signal is output here.

LED1: Indicates that the sensor is supplied with voltage

LED2: Indicates that a magnetic field has been detected

Functionality of the sensor

This sensor has three functional components on its circuit board: The front sensor unit, which physically measures the environment and outputs it as an analog signal to the second unit, the amplifier. This amplifies the signal depending on the resistance set on the rotary potentiometer and sends it to the analog output of the module.

Here it is to be noted: The signal is inverted. If a high value is measured, this results in a lower voltage value at the analog output.

The third unit represents a comparator, which switches the digital output and the LED when the signal falls below a certain value. This value (and thus the sensitivity of the module) can be adjusted via the rotary potentiometer: 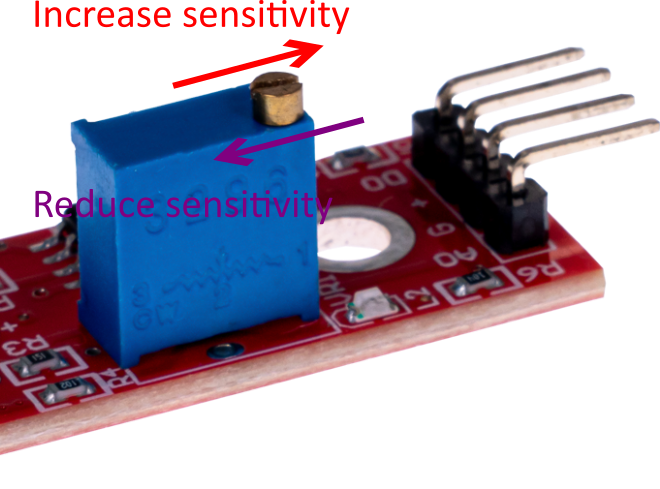 The program reads the current voltage value, which can be measured at the analog output, and outputs it on the serial interface.

In addition, the state of the digital pin is also indicated in the console. This indicates whether the limit value has been exceeded.

Analog sensor, therefore the following must be considered: The Raspberry Pi has, in contrast to the Arduino, no analog inputs or there is no ADC (analog digital converter) integrated in the chip of the Raspberry Pi. This limits the Raspberry Pi, if you want to use sensors, which do not output digital values, but a continuously changing value (example: potentiometer -> different position = different voltage value).

To avoid this problem, our sensor kit X40 contains the KY-053, a module with a 16-bit ADC, which you can use on the Raspberry to expand it with 4 analog inputs. This module is connected to the Raspberry Pi via I2C, takes over the analog measurement and transfers the value digitally to the Raspberry Pi.

So we recommend to connect the KY-053 module with the mentioned ADC in between for analog sensors of this set. You can find more information on the KY-053 Analog Digital Converter information page.

The program uses the corresponding ADS1x15 and I2C Python libraries from Adafruit to control the ADS1115 ADC. These have been published at the following link https://github.com/adafruit/Adafruit_CircuitPython_ADS1x15 under the MIT license. The required libraries are not included in the download package below.

The program reads the current values of the input pins and outputs them to the console as a value in [mV].

Please note that you must enable I2C on your Raspberry Pi before using this example.

Analog sensor, therefore the following must be observed: The Micro:Bit has analog inputs or there is an ADC (analog digital converter) integrated in the chip of the Micro:Bit. However, these are only limited to 10-bit and therefore offer only a rather low accuracy for analog measurements.

To avoid this problem, our sensor kit X40 contains the KY-053, a module with a 16-bit ADC, which you can use on the Micro:Bit to expand it by 4 analog inputs. This is connected to the Micro:Bit via I2C, takes over the analog measurement and transfers the value digitally to the Micro:Bit.

The program uses the corresponding library from us to control the ADS1115 ADC. This has been published under the following link pxt-ads1115 under the MIT-License.