A light emitting diode that emits in the infrared range. 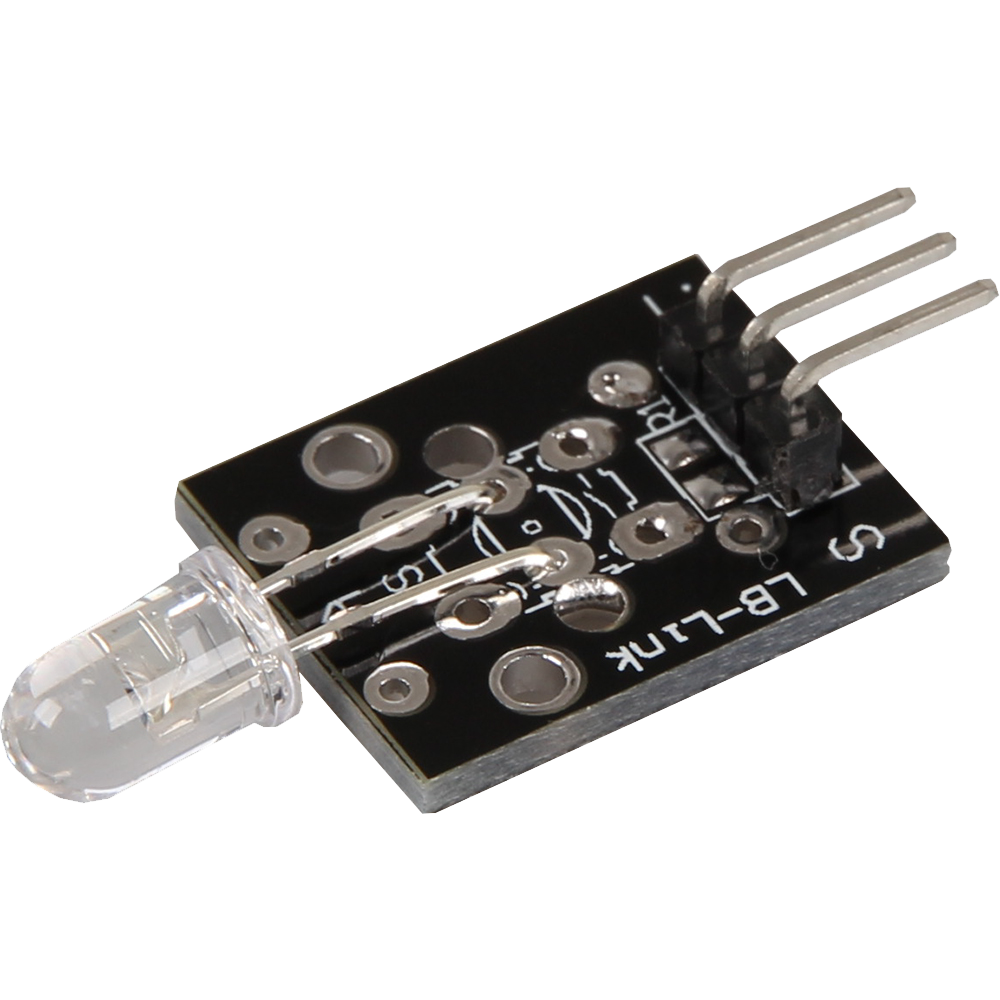 A light emitting diode that emits in the infrared range. Depending on the input voltage, series resistors are required.

The designations (Vf and If) refer to the forward voltage and forward current of the light emitting diode.

[e.g. when used with ARM CPU core based microcontrollers like Raspberry-Pi]

[e.g. when used with Atmel Atmega based microcontrollers like Arduino].

The term (Rf) here refers to the required series resistor before the light emitting diode based on the applied voltage.

*On the board there is the possibility to directly solder the resistor needed in each case. **The place for soldering the resistor is directly above the connection pins on the PCB. In this case, the middle pin can be used, which then contains the resistor.

Baudrate of serial output should be set to 115200 otherwise remote control example will not work.

This code example shows how an LED can be switched on alternately for four seconds and then switched off for two seconds using a definable output pin.

With the help of the two sensor modules KY-005 and KY-022 an infrared remote control + infrared receiver system can be built. For this purpose, two Arduinos are needed in addition to the two modules. These function here then as transmitter and as receiver of the signals. It is only important what the receiver of the signals in the serial console outputs and what the transmitter sends because this should match.

For the following code example an additional library is needed:

Arduino-IRremote by Ken Shirriff | published under the MIT license.

The library is not included in the package and must be copied to the "library" folder before starting the Arduino IDE.

This can be found by default under the following path of your Windows installation:

For infrared sending systems, there are different protocols in which the data can be sent. In the following example the NEC protocol is used for sending data using the modified SimpleSender example and the modified SimpleReceiver example - the used library "Arduino-IRremote" takes care of the conversion to the correct data sequence by itself. However, there are other protocols/encodings within the library - these are identified in the library documentation/code. Documentation.

In order to use the code that follows, a few important things need to be taken into account. First of all you have to open the already existing example from the library because it opens a very important file that is needed for receiving. To open this example go to File -> Examples -> IRremote -> SimpleReceiver. Once you have done this, all you need to do is replace the code in the example with the code below for the receiver. After that you only need to select the Arduino you have connected your receiver to. You do this as follows, you go to Tools -> Port -> COM. It is important that you select the COM where your first Arduino is connected to which will later serve as a receiver. In this example it is possible to change lines 88 to 93.

Code for the receiver

Again, in order to use the following code, a few important things need to be taken into account. First of all you have to open the already existing example from the library because a very important file is opened which is needed for sending. To open this example go to File -> Examples -> IRremote -> SimpleSender. Once you have done this you only need to replace the code in the example with the code below for the transmitter. After that you only need to select the Arduino you have connected your transmitter to. You do this as follows, you go to Tools -> Port -> COM. It is important that you select the COM to which your second Arduino is connected which will later serve as a transmitter. In this example it is possible to change the lines 49 to 58.

After you have set up your transmitter it is important to switch back to the COM with the correct port to get the serial output of the receiver Arduino.

Code for the transmitter

There are two application examples for this sensor module presented here. One which briefly turns the infrared transmitter diode on and off (emitting light not visible - can be seen through a cell phone camera for example), and a direct application example for the Raspberry Pi where it can be programmed as either an infrared receiver for remote controls to control e.g. the media center software OpenElec, or as an infrared transmitter for software controlled remote control.

With its advanced processor architecture, the Raspberry Pi has the advantage over the Arduino that it can run a complete Linux operating system. With the help of an infrared receiver, not only simple data signals can be exchanged, but also complete software programs such as the media center software OpenElec can be operated by remote control.

For this purpose, the modules KY-005 are applied as infrared transmitter and KY-022 as infrared receiver.

To set up an infrared control system, you will follow these steps.

First, you will edit config.txt by using the command....

Then put the following at the end of this file.

Use the key combination [CTRL+X] to finish editing and [CTRL+Y] to save.

After you have shut down the Raspberry Pi with...

... you will now execute the following commands...

... You should then see the following.

The next thing you have to do is to install ir-keytable...

... to confirm a successful installation you should...

... and then also get the following output.

After all this, here are a few more steps...

... is used to display all possible protocols that can be used.

Is now entered to see which device is used for sending (there is the possibility that either rc0 or rc1 is used (see /sys/class/rc/rc0 or rc1))...

Depending on what is the case, the following command is modified as needed.

This now completes the configuration of our receiver, next we will use our sender to send something to our receiver.

As a result of the previously executed command you should...

... should appear. After that you only have to execute one last command...

... and you are now done and have a working setup. 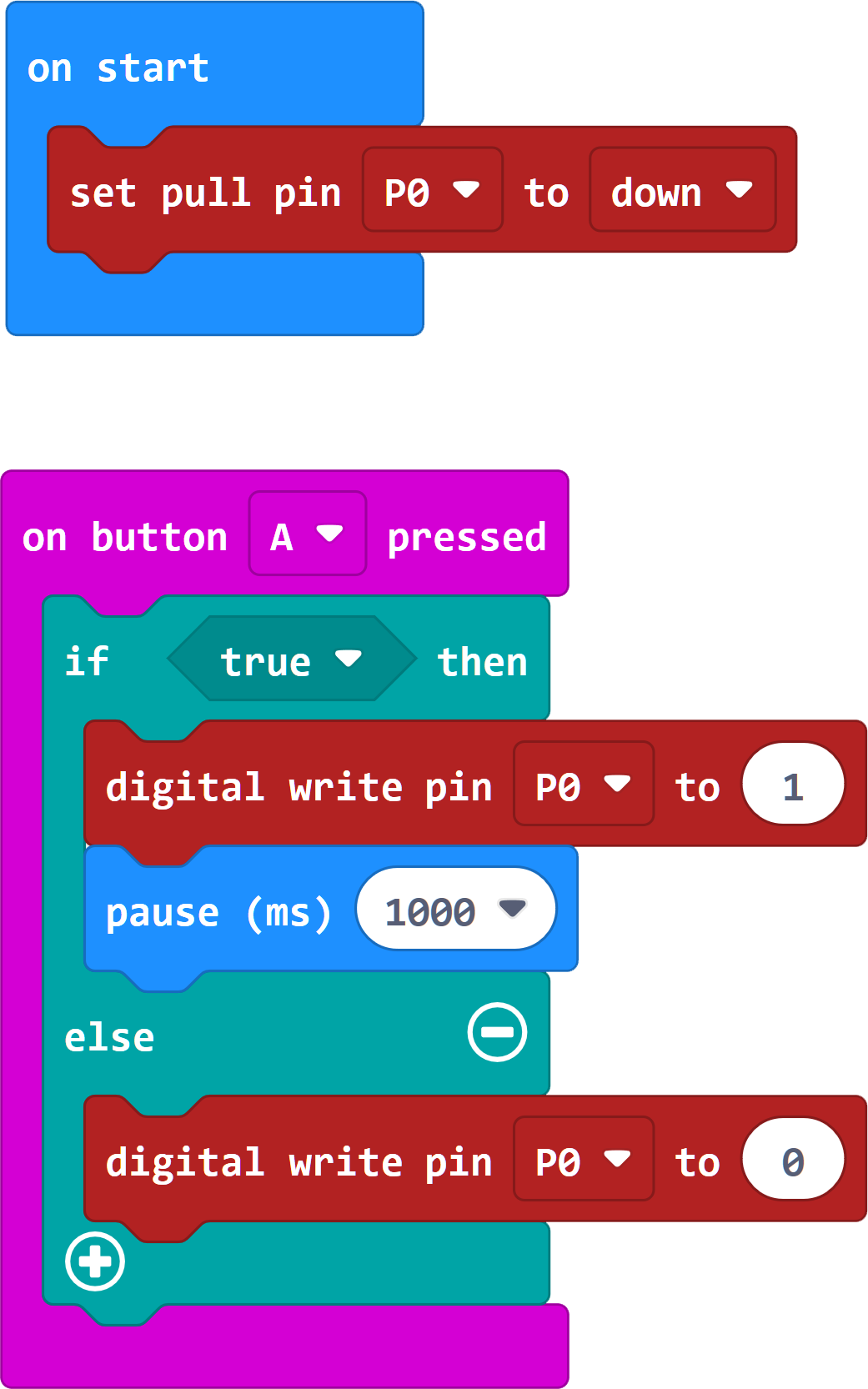 Two additional libraries are needed for the following code example:

pxt-makerbit-ir-transmitter from 1010Technologies | released under the MIT License

pxt-makerbit-ir-receiver by 1010Technologies | published under the MIT License.

You must add these libraries to your IDE before using the code.

You do this by going to Extensions in your IDE and using the following 2 URLs https://github.com/1010Technologies/pxt-makerbit-ir-transmitter.git and https://github.com/1010Technologies/pxt-makerbit-ir-receiver.git to search for the library and add it. It should be mentioned that sometimes the libraries only appear after you have added the second library. 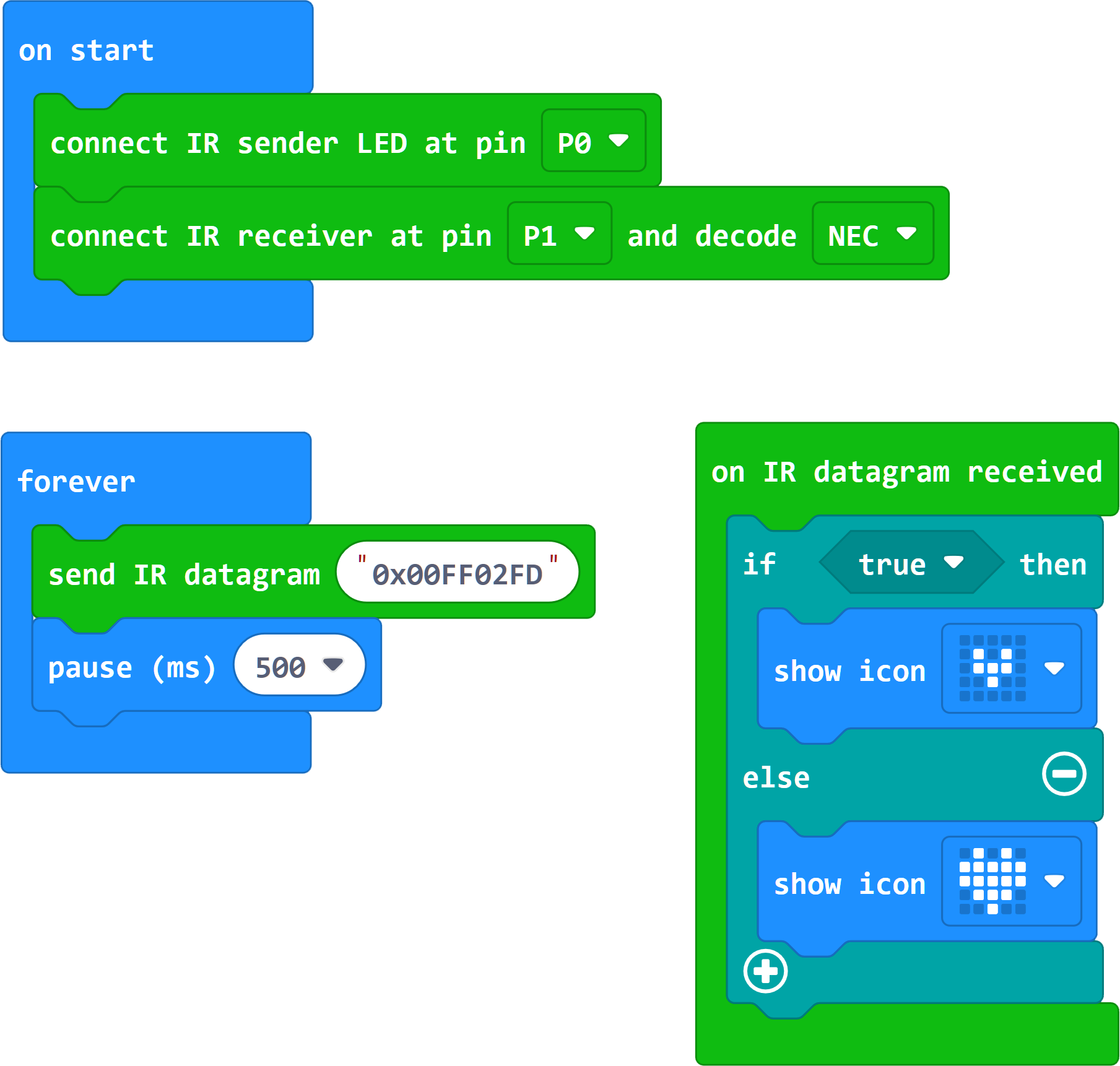