This sensor is used for distance measurement via ultrasound. 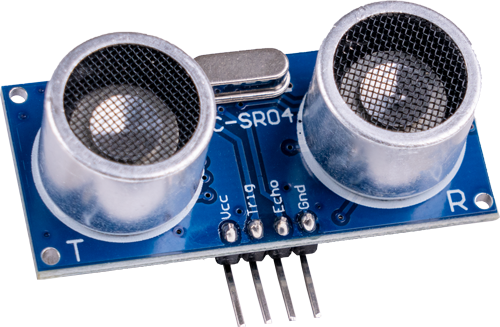 This module shows how the distance to an object can be measured without contact using an ultrasonic loudspeaker and a microphone. The principle is based on the fact that the speed of sound in the air remains almost constant at constant temperature - at 20 ° C it is 343.2 m / s.

From this fact, the distance measurement can be converted into a time measurement, which can then easily be taken over by microcontrollers. 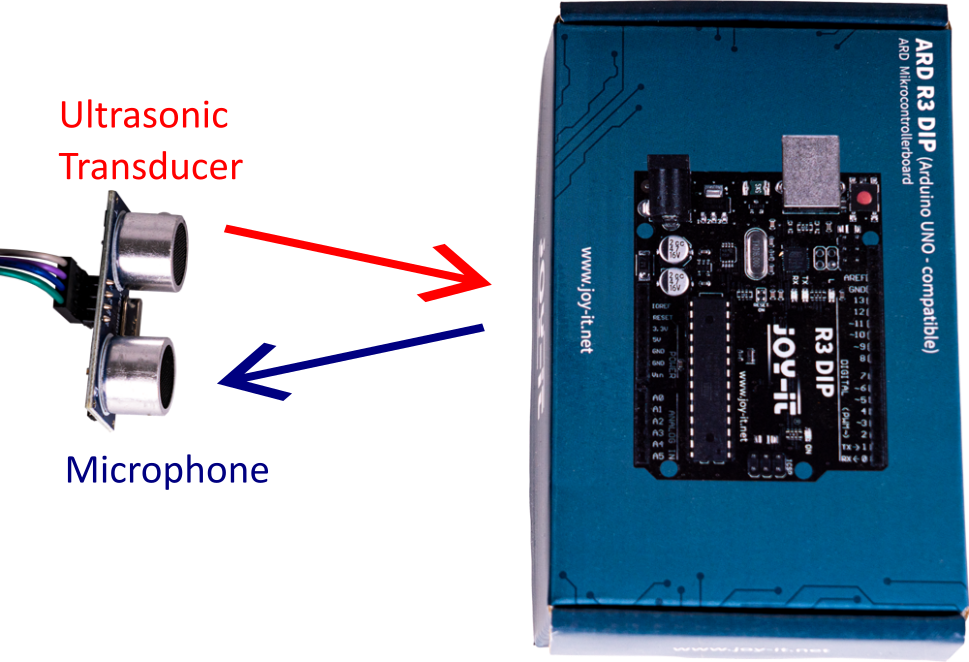 In the sensor module presented here, the ultrasonic loudspeaker sends eight 40KHz signals, which are then reflected by an object and picked up by the microphone. Ultrasound is used because it is outside the audible range of the human ear (roughly 20Hz-22,000Hz).

The transmission of the ultrasonic signal is started when a 10µs long start signal (ActiveHigh) is received at the "Trigger input pin". After transmission, the signal is activated at the "Echo output signal pin" (ActiveHigh). If the reflected signal is now picked up again at the microphone, the echo signal is deactivated again after the detection. The time between activation and deactivation of the echo signal can be measured and converted into the distance, as this also corresponds to the time how long the ultrasonic signal needed to overcome the distance between loudspeaker-> reflective wall -> microphone in the air. The conversion is then carried out by approximating a constant air speed - the distance is then half of the distance covered. 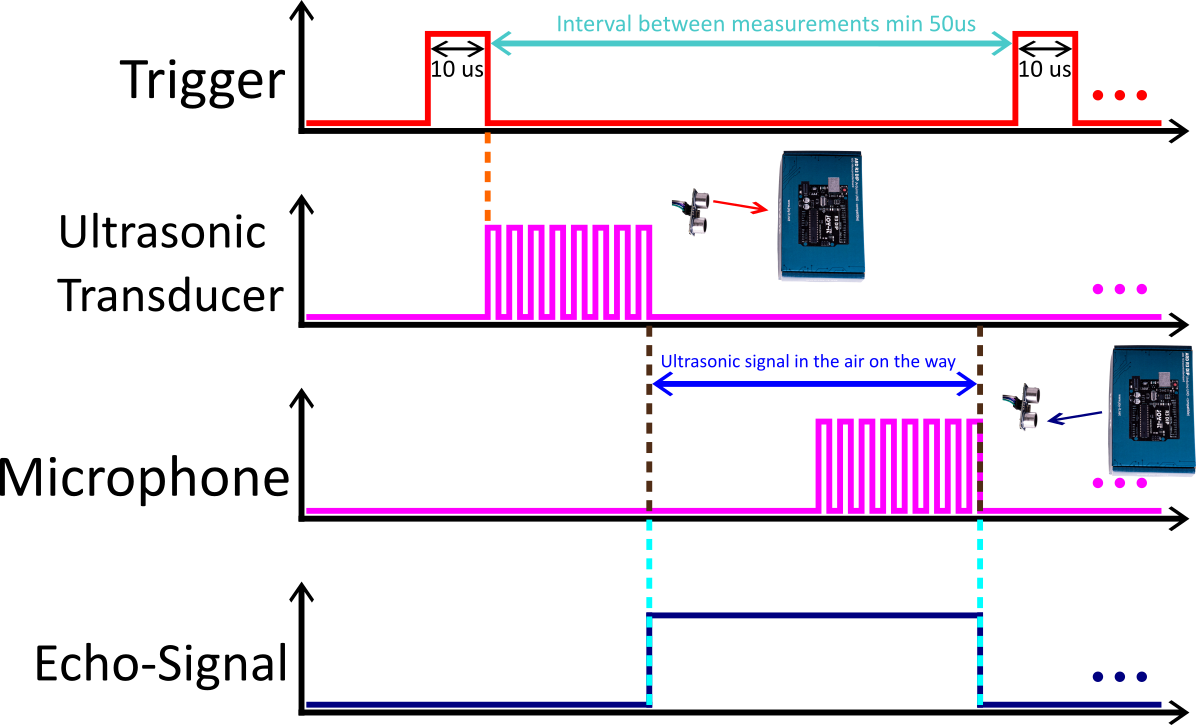 The example program activates the distance measurement according to the above principle and measures the time with the help of the Arduino function pulseIn how long the ultrasonic signal is in the air. This time is then used as the basis for converting the distance - the result is then output in the serial output. If the signal is outside the measuring range, a corresponding error message is issued.

5V voltage level, therefore the following must be observed

For such cases, this sensor kit set has a voltage translator with the KY-051, which adjusts the voltage level and thus ensures safe operation. With this sensor, this must be connected between the Rasperry Pi and the sensor.

The example program activates the distance measurement according to the above principle and uses a kind of stopwatch to measure the time how long the ultrasonic signal is in the air. This stop watch is implemented by reading the current system time from time.time () when the echo signal is switched over; the difference between the switch-on time and the switch-off time is the time sought and how long the signal is traveling. This time is then used as the basis for converting the distance - the result is then output in the cosnole. If the signal is outside the measuring range, a corresponding error message is issued.

An additional library is required for the following code example:

pxt-sonar by Microsoft | published under the MIT License

You have to add this library to your IDE before using the code.

You do this by going to Extensions in your IDE and looking for the library with the following URL https: //github.com/microsoft/pxt-sonar.git and then adding it. 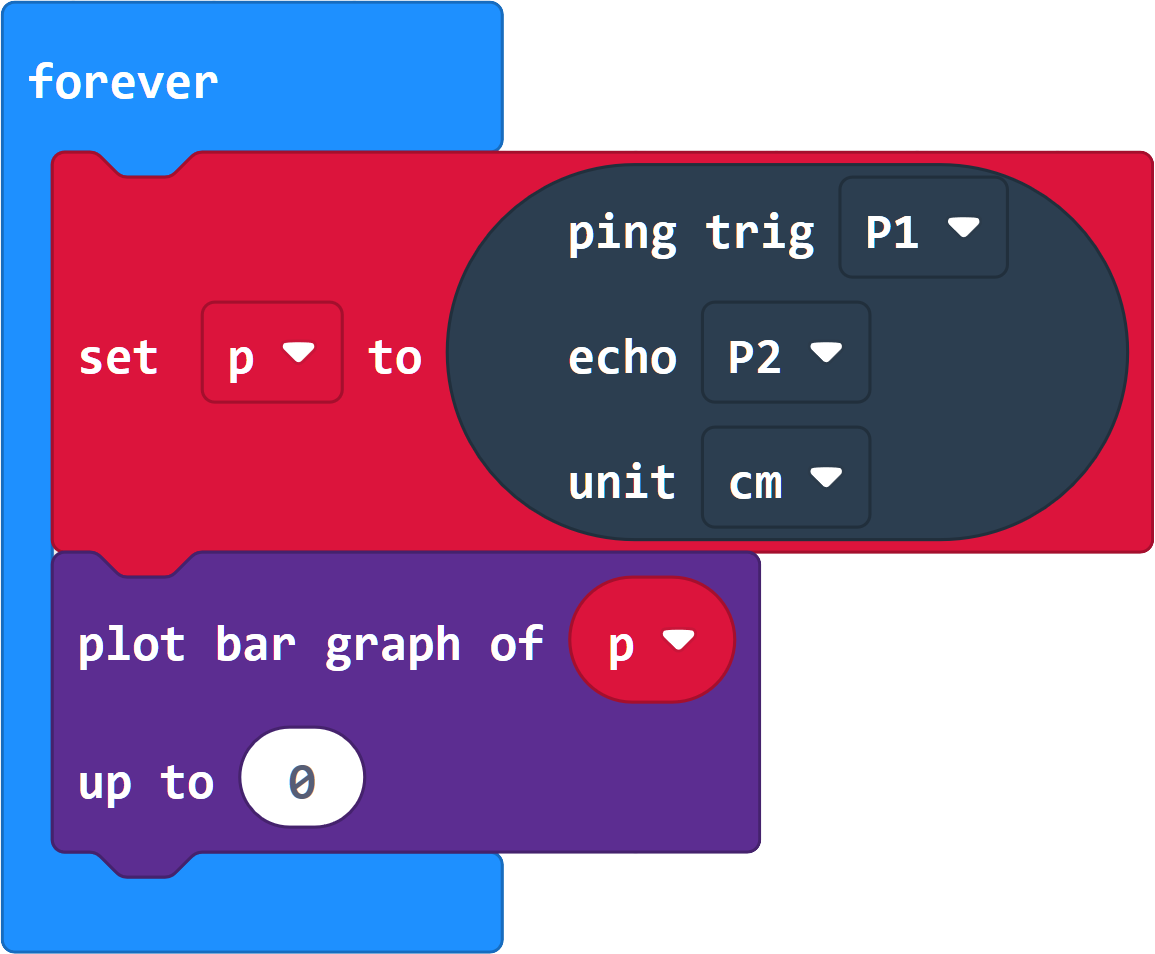